Goodbye Too Soon: How Hospice Helped One Family Provide Care & Dignity for Their Son

Jerry and Fran Mowrey faced the unthinkable when their 25-year-old son Justin passed out at work, a mass on his brain discovered soon after. As his parents, they faithfully walked alongside him for years of surgeries, cancer treatments, strokes, and major setbacks.

“Justin was an amazing young man — kind, driven, good-hearted,” Jerry said proudly. Justin loved God and his family. Known as their family’s “safety guy” and affectionately considered a “cool geek,” he was a hard worker with a promising career with OSHA. With his favorite Bible verse Joshua 1:9 tattooed on his chest, he lived a “strong and courageous” life, even during his years-long cancer journey.

From doting parents to full-time caregivers, the Mowrey’s intense devotion to their son never wavered. They sought resource after resource, and once they realized Justin’s case was incurable, they understandably felt a range of emotions, from despair to anger to fear.

“Accepting that your child will pass is a whole different level,” admitted Jerry, even after five years of constant bad news. 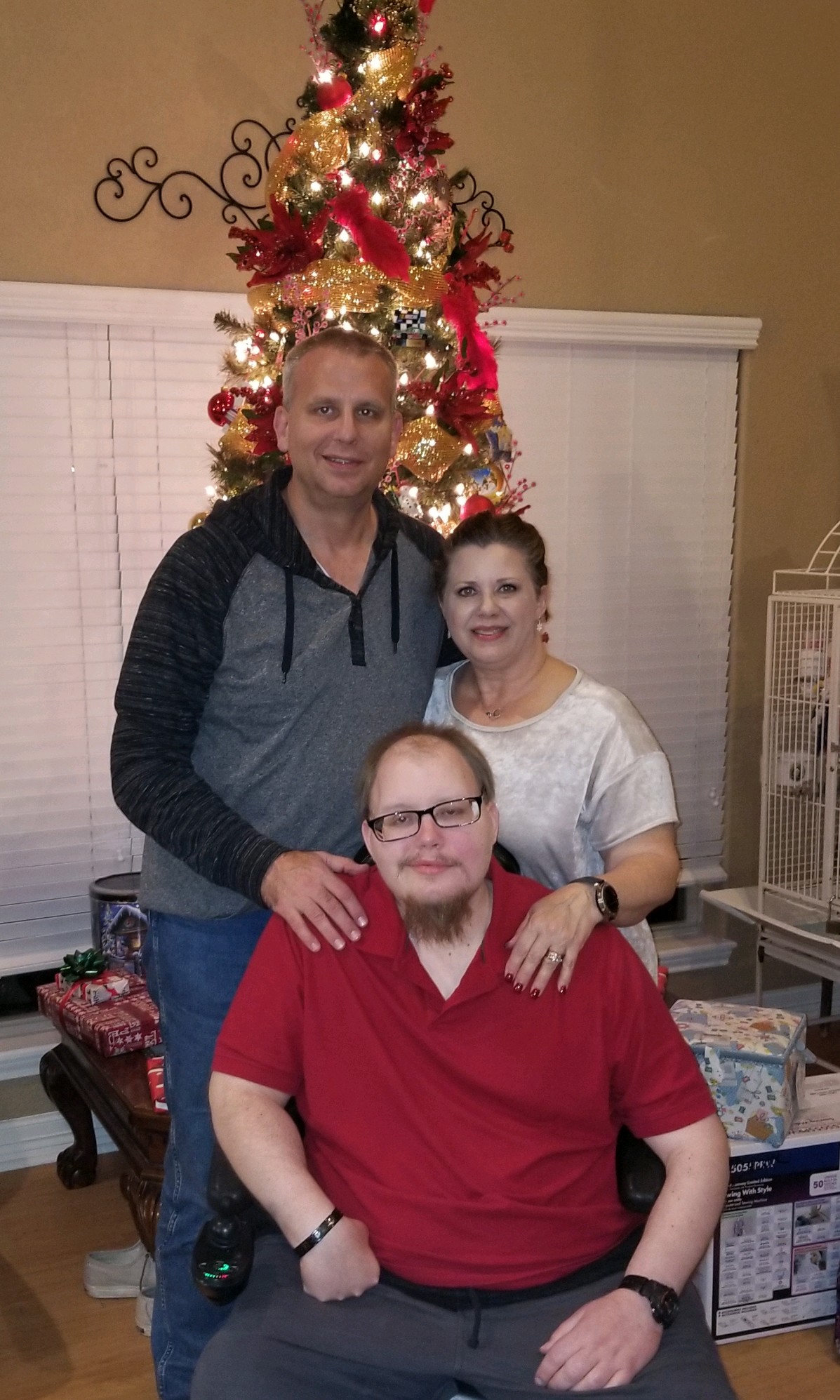 A Valiant, Winding Road to Hospice

After Justin’s initial diagnosis, he had surgery to safely remove half of the tumor. During his determined fight to live, he suffered from severe chemo brain, numerous strokes, and several brushes with death. The Mowreys watched their son slowly decline, though he was still able to communicate and interact.

Fran, Justin’s mom, served as his full-time caregiver and both parents left their jobs to devote their time to his care. “Fran was our rock!” said Jerry gratefully.

A massive stroke in 2019 led to a 30-day stay at the MD Anderson Cancer Center, where scans showed no potential for improvement. Jerry and Fran made the gut-wrenching decision to remove Justin from life support. To everyone’s surprise, he continued to breathe on his own. The cancer center supported the Mowrey’s decision to bring Justin home for his final days, where he lived for another 14 months with around-the-clock care from his parents.

After the stroke, Justin’s health care needs intensified. Fran previously provided 100 percent of the care on her own, but they knew they needed hospice support at that stage. They interviewed several hospice companies and chose Heart to Heart Hospice in Lufkin, Texas, near their home.

Jerry said that Heart to Heart Hospice provided an individual care plan, not a cookie-cutter approach. They were quick to make adjustments to his care. Though Justin couldn’t talk, he could communicate when he was in pain by gritting his teeth. Beyond addressing immediate medical needs and comfort measures, the hospice caregivers honored the Mowreys wishes on Justin’s care plan. They helped him eat and drink again, they bathed him, and coordinated supplies, medicine changes, and more.

“Our hospice aides and nurses became our family,” said Jerry. “They taught us how to care for Justin in this new condition, they helped us emotionally and with practical things, they gave us a break when we needed it. I cannot imagine not having our CNA Lyric and RNs Anna and Kathy.”

Hospice also provided emotional support during those difficult days and reinforced that the family was doing the right thing. The Mowreys relied on each other, hospice, and their faith to survive.

If the stress of full-time caregiving for their son wasn’t already enough, Fran’s mother was declining. Suffering from dementia, she was placed in a nursing home in another state after family members could no longer care for her. In 2020, during the midst of the Covid-19 pandemic, Fran brought her mother to live with them in Texas to honor her wishes to die at home.

Fran was now simultaneously caring for two hospice patients, her son and her mother. While mentally deteriorating, Fran’s mom was still verbal and somewhat mobile. They utilized overnight respite care for her mother four times, which helped ease some stress, at least temporarily. Their care overlapped for nine months in 2020; Justin, only 30 years old, passed away in June and Fran’s mother died in December of the same year.

When Justin was in his final hours, hospice came that night. Jerry said the Heart to Heart Hospice team was amazingly supportive. “We knew they loved us,” said Jerry. “Justin never said a word to them, and they loved him. A friend of Justin will always, forever be my friend.”

He said many hospice team members came to Justin’s funeral and they still keep in touch with many of them. They hosted a gathering after losing both Justin and Fran’s mom to thank their hospice caregivers. “It doesn’t seem like enough for what we received,” said Jerry, sharing immense appreciation and indebtedness for their “hospice family.”

Once they processed the shock that their son would not get well, the Mowreys said hospice was a game-changer for them. Sharing the burden with professionals who understand end-of-life care was vital for their son’s dignity and their own sanity.

As capable professionals, who were able to quit their jobs to provide care, Jerry said he and Fran still needed hospice support. “They have a heart for caregivers and us as parents,” he added. He advises other families: “Don’t be afraid or wait too long to call on hospice.”

Many families don’t take full advantage of hospice care, though it’s been widely available for more than 35 years in the U.S. Studies show that a majority of hospice recipients receive care for less than 30 days, when they can qualify for six months of assistance (or more like the Mowrey’s case). Earlier hospice care leads to less pain and a better death experience for the patient and family.

Feeling helpless can give way to resources to help your loved one have dignity in their final days and support for caregivers in their new role. Jerry implores families to seek hospice sooner than they think they need it, once doctors determine curative treatments are no longer effective.

The Mowreys have turned their own personal pain into generosity toward others. They donated to the Heart to Heart Hospice Foundation and Justin’s medical equipment, like his electric wheelchair and hospital bed, to others in need.

They will never get over losing their son, but they are seeking to live life to the fullest after years of intense caregiving and impossible grief. The Mowreys work through their heartache by talking about their experience, attending to their mental health, clinging to their faith, enjoying concerts together, traveling often, and appreciating every day they have together.

The Mowreys share Justin’s story to offer encouragement, hope, and peace to other hospice families. His short life continues to impact the world for good.

See More of Us On Social